A Toast to my Sister and Brother-in-law

A month ago today, a lot of awesome people gathered for the nuptials of the Rev. Dr. Meredith Holladay. Her sister gave a toast, and now wants to share it with all the awesome people who weren’t there. Happy One Month Anniversary, Zachadith!

Hi everyone!  My name is Emily Holladay, and in 1996, I was named the best sister in the whole world by one Meredith Holladay. There are two things you should know about me and my sister: 1. I laugh the hardest when she’s around, and 2. I know it’s hard to believe, but we haven’t always gotten along.

Meredith experiences life in a more vibrant way than most of us normal people.  She throws herself at all life has to offer and feels the highs and lows so deeply that I’m almost jealous of her ability to see everything so much brighter than the rest of us.

Meredith’s heightened zeal for life has taken her on many journeys.  From traveling cross country to earning her PhD, Meredith hasn’t let much get in her way of accomplishing her dreams and living life beyond the fullest. 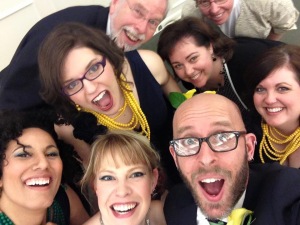 Lots of ordained people in one picture.

And her ability to feel so deeply also makes her more keenly aware of the feelings of others.  When you’re in the room with Meredith, it’s nearly impossible not to feel what she’s feeling – her capacity for joy and sorrow is contagious.

So, it’s no wonder that Meredith is my favorite person to laugh with.  When we’re together, you’re more likely to hear snorts and giggles than actual talking.  And the thing is, almost nothing we laugh about is conventionally funny.  I can’t always laugh that way with other people, because they don’t “get it” the way Meredith does.  And I love her for it, because everyone needs a good belly laugh every once in a while – everyone needs to feel life they way she does from time to time.

But, as I said before, we did not always get along. In fact, for many years, both of us begged our parents for a brother. I’m not sure what Meredith’s reasoning for this was, but I thought a brother would be more “chill,” and would want to ride bikes and play basketball. I also figured a brother wouldn’t tease me for wearing a bra or having a “mullet.”

Much to our chagrin, we never got that brother we asked for, but a few months ago, Meredith called me with the news. I was going to be a new little sister! And they were throwing a wedding to celebrate.

Now, here are the things I know about Zach:
*He can’t sit still.
*Riding bikes and running are his favorite modes of transportation.
*He is genuinely interested in the lives of the people he loves, but he will rarely respond to a text message.
*He and my sister live in their own world most of the time, and it’s both sickening and super cute at the same time.
*He loves Meredith a lot and challenges her to be the best version of herself.
*So far, he has yet to make fun of my clothing choice or hair styles.

Of all the people I could ask for to be my new brother, Zach is pretty much the best. I’m thankful that he has chosen to love my sister and my family in turn. I am excited to see how Meredith and Zach continue to share their passion for life together, and I’m so glad I get to celebrate with and for you both.

To Meredith and Zach, who on this day in 2015, I proclaim to be the best sister and brother-in-law in the whole world!