Why Passport Matters (to me)

In 1999, a fresh faced, energetic 12-year-old hopped onto the back of a charter bus with her lifelong best friend, sister, and about 60 other teenagers from her neighborhood church to head to Daytona, Florida, for a week at Passport Youth Camp.

After only six years of providing the “youth camping with a mission program,” Passport already had a reputation as “the best week of your life,” and the young campers from Crescent Hill Baptist Church in Louisville, Ky., were eager to experience the transformative week again – or in this young girl’s case, for the first time!

During her week at Passport, she met teenagers from across the country who cared deeply about making a difference in the lives of others. Her Bible Study Leader, Kacey, taught her that God created her with a unique set of skills and qualities that made her wonderful, just as she is. And, through worship and mission projects, she learned to follow the call of Micah 6:8 to Do Justly, Love Mercy, and Walk Humbly with God.

As soon as she got home, she started saving her money and taking $20 at a time to her youth minister so that she could go to camp again the next year – and for the next five years after.

I was so cool in my viola and overalls.

Her journey with Passport helped her to see herself as a child of God – loved and valued simply for being herself. The weeks of camp took her to low income neighborhoods where she brought joy to children, and received grace and love in return. At Passport, for the first time, she gave a testimony in front of a group of her peers, and played “Wild Thing” with her high school band at the Variety Show. As a senior in high school, she constantly looked back at Passport as “the best week of her life.”

And, now, after two years of working in Passport’s National Office in Birmingham, Ala., and four summers serving on camp staff, the once doe-eyed sixth grader is an associate pastor at a church in Louisville, preparing to take her own group of campers to experience “the best week of their lives.” 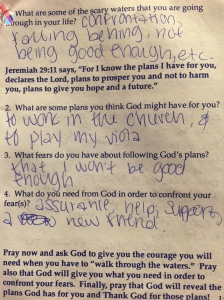 Passport is like soul food. You don’t know what you’re missing until you’ve tried it, and once you do, you crave it for all the flavors it introduces and the comfort it provides. Like soul food, there aren’t many experiences that leave you feeling more full than a week at Passport.

So, when David Burroughs called me (you probably guessed by now that I am the sixth grader mentioned above) and asked me to serve on Passport’s 25th Anniversary Capital Campaign Team, the only answer was, “Yes. Serve me up some of that Passport soul food.”

Over the past 18 months, a team of us have worked together to celebrate Passport’s rich nearly 25 year history of putting hands and feet to the Gospel in towns across the United States. We have made phone calls and written letters asking people to help ensure that Passport continues this mission for another 25 years.

And throughout the process, we have been reminded time and again that Passport Matters!

Passport Matters, because children and youth are confronted with the overwhelming truth that the God who created them loves everything about them – even their awkwardness.

Passport Matters, because communities are transformed by the selflessness of students who have given up more than one million hours over the past 23 years to serve in tangible ways.

Passport Matters, because it is often the first and only place children and youth will see a woman preach. Or another young person preach.

Passport Matters, because it gives children, youth, college, and seminary students space to explore their unique callings, live into their identity in Christ, and find their voice.

Passport Matters, because it trains college and seminary students to be ministers and professionals who serve with integrity, compassion, and hope deeply rooted in the Gospel of Jesus Christ.

A note from the journal I kept my first summer of camp.

Nearly two decades after I arrived home from my first camp experience, I am still saving my money for Passport. Each month, I give what little I have so that another sixth grader might have her life changed by the power of Christ through the work of Passport. 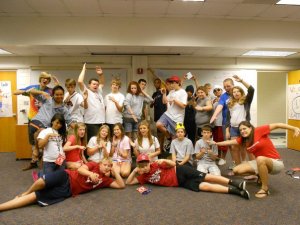 One of my last Bible Study groups ever!

In a day and age when so many things compete for the attention of children, youth, and their families during the summer, I invest in Passport, because I see what a difference it makes beyond just the week at camp.

Truly, though Passport is an ecumenical organization, it is also a significant part of the Cooperative Baptist Fellowship’s history, as it was originally created at the suggestion of Pat and Carolyn Anderson of CBF Florida. Over the past 23 years, Passport campers have given over $1 million to missions efforts, including those of CBF field personnel. Through that giving, Passport has raised a generation of young adults who care deeply about those missions efforts and continue to invest in the work of the field personnel they learned about at camp. 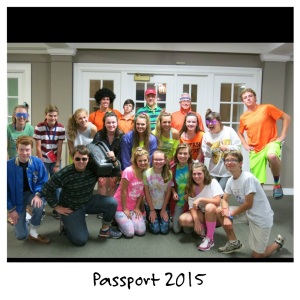 As the summer begins, I hope that you will pray for the students, staffers, chaperones, and ministers who will experience “the best week of their lives” at Passport this summer. Pray that God will continue to work through this vibrant, vital ministry.

If you would like to learn more about the Passport Capital Campaign, please visit the website:http://passportcamps.org/matters/. And, if you feel so inclined, let Passport know that you think they matter by investing in the future of this wonderful organization.

Perhaps I’m not as fresh faced or energetic anymore, but when I hop on our charter bus this summer, I will be as eager as I was nearly 20 years ago when I got to experience camp for the first time. I can’t wait to see everything fresh through the eyes of the children I serve, and be reminded once again that Passport Matters.

One thought on “Why Passport Matters (to me)”